The Bureau of Ocean Energy Management (BOEM) is the lead federal agency for all offshore wind projects located within federal waters. BOEM facilitates lease sales of OCS blocks for the development of offshore wind energy facilities. There are currently three offshore leases with projects in development off the coast of New Jersey. New Jersey Department of Environmental Protection (NJDEP) is tasked with permitting all aspects of the projects within state waters three (3) nautical miles of New Jersey’s coastline.

“From rising seas that threaten our coastline to higher temperatures that endanger the health of our most vulnerable residents, climate change is already impacting New Jersey, and we must act to reduce its adverse effects. Through the responsible development of offshore wind facilities, we can protect our aquatic and coastal resources and the communities who rely upon them while taking bold action to address the climate crisis by reducing emissions from fossil-fuel dependent energy sources. Alongside our interagency colleagues and stakeholders, the Department of Environmental Protection will play an important role in advancing this critical work in the years ahead.” 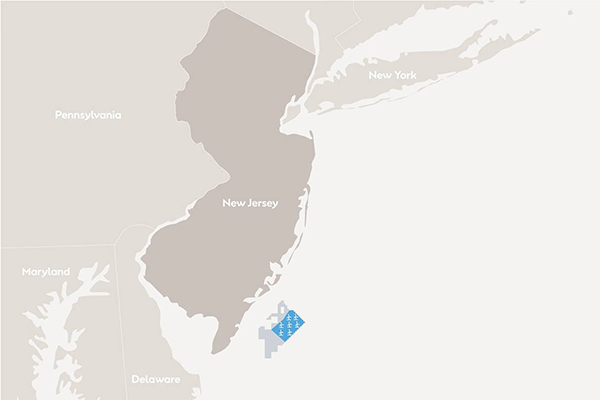 Ørsted’s Ocean Wind 1 lease area (OCS-A 0498) is located approximately 15 miles off New Jersey’s coast. On June 21, 2019 the NJBPU announced that Ørsted’s Ocean Wind 1 Project was awarded a solicitation for 1,100 MW offshore wind project. This 1,100 MW project has the potential to power nearly half a million homes in New Jersey.

Ocean Wind 1’s Construction and Operations Plan (COP) was submitted to BOEM on August 15, 2019, with updated versions submitted on March 13, 2020, September 24, 2020, and March 24, 2021. BOEM will review the COP and approve, disapprove, or approve with modifications the proposed activities. On March 30, 2021, BOEM published a Notice of Intent to Prepare an Environmental Impact Statement for Ocean Wind 1. The Notice of Intent initiates a 30-day public comment period and triggers the beginning of the State’s review process under a Federal Consistency review. On June 24, 2022, BOEM published a Notice of Availability (NOA) for the Ocean Wind 1 Draft Environmental Impact Statement (DEIS) which initiates a 45-day public comment period that ends on August 8, 2022. The Ocean Wind 1 DEIS can be viewed here. Ocean Wind 1 is targeting construction commencement for the first quarter of 2023, with commercial operations expected by the end of 2024. 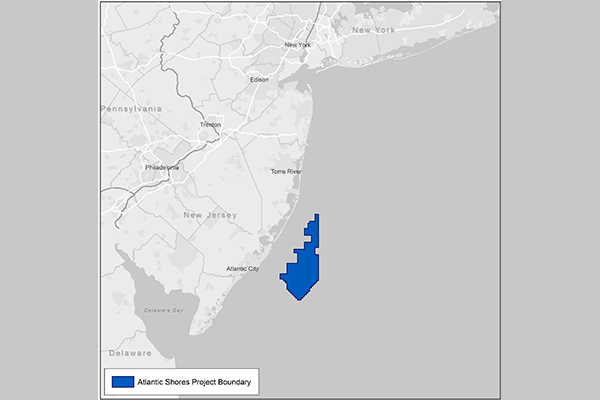 On April 8, 2021 BOEM approved Atlantic Shores Site Assessment Plan (SAP). On March 25, 2021, Atlantic Shores submitted their COP which is currently under review with BOEM. On June 30, 2021 the NJBPU awarded Atlantic Shores OREC’s for their 1,509.6 MW Project. The wind turbines are expected to begin generating power in 2028.

NJDEP Comments on Notice of Intent to Prepare an Environmental Impact Statement for the Atlantic Shores Offshore Wind, LLC . 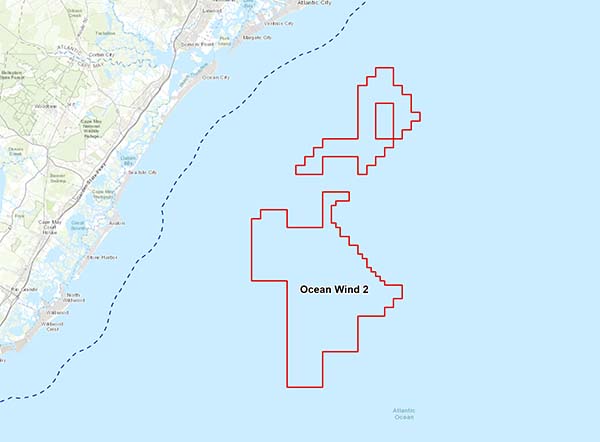 On December 8, 2020, Ocean Wind LLC submitted an application to BOEM to assign a portion of lease #OCS-A 0498 to Orsted North American Inc. BOEM approved the assignment on March 26, 2021. The lease area assigned to Orsted North America Inc. now carries the new lease number #OCS-A 0532 and is being developed under the project name “Ocean Wind 2”. On June 30, 2021 the NJBPU awarded OREC’s to Ocean Wind for their 1,148 MW Ocean Wind 2 project which will be located in lease area #OCS-A 0532.

Ocean Wind 2 anticipates submitting their Construction and Operations Plan (COP) to BOEM in early 2023. The wind turbines are expected to begin generating power in 2028. 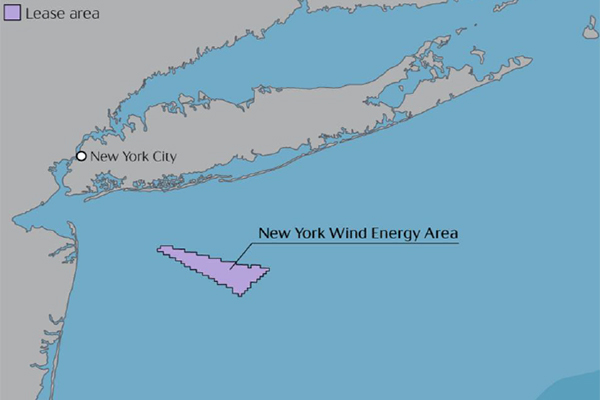 Equinor’s Site Assessment Plan (SAP) was approved by BOEM on November 21, 2018. Empire Wind submitted its Construction and Operations Plan (COP) on January 10, 2020 with an updated version submitted on April 14, 2021. BOEM will review the COP and approve, disapprove, or approve with modifications the proposed activities. On June 24, 2021 BOEM published a Notice of Intent to Prepare an Environmental Impact Statement for Empire Wind 1 & 2. The Notice of Intent initiates a 30-day public comment period and triggers the beginning of the State’s review process under a Federal Consistency review.

Because of the proximity to New Jersey’s coast, the Department will have an opportunity to review both Empire Wind 1 and Empire Wind 2 through federal consistency and the NEPA process. 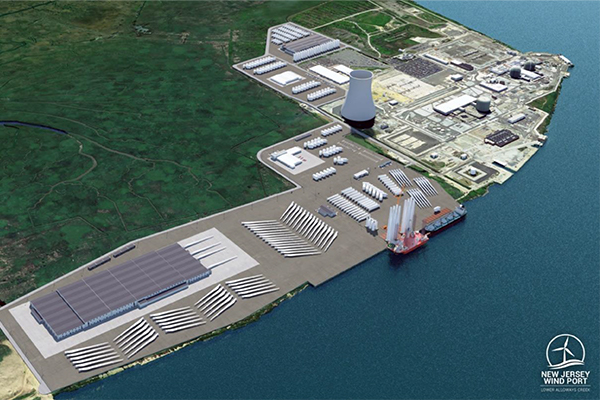 The New Jersey Wind Port is a 200+ acre transformative, hub-style marshalling and manufacturing port project that will serve offshore wind projects in New Jersey and the Mid-Atlantic.

The port will be the first purpose-built, greenfield port for offshore wind on the East Coast, with no vertical restrictions and easy access to more than 50 percent of the available US offshore wind lease areas.

Phase 1 construction is slated to begin in 2021 and will be completed by 2023, in time to support the first round of New Jersey and East Coast projects. 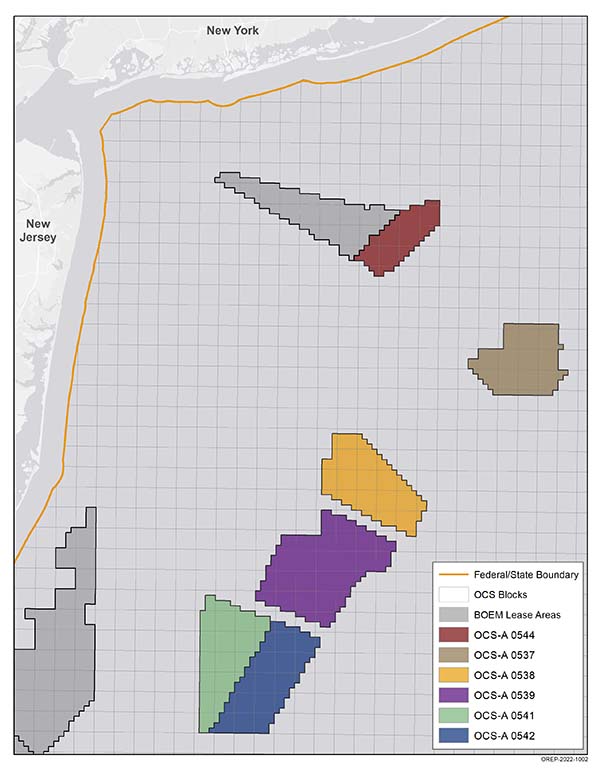 In support of BOEM’s priorities to advance domestic energy production, generate revenue, and increase job opportunities nationwide, BOEM is moving forward with wind energy planning efforts on the Outer Continental Shelf (OCS) in the New York Bight region, which represents an area of shallow waters between Long Island (to the north and east) and the New Jersey coast (to the south and west).

On June 11, 2021, the Department of the Interior announced a proposed sale notice for offshore wind development on the Outer Continental Shelf in the New York Bight. On Jan. 12, 2022, Secretary of the Interior Deb Haaland announced that BOEM will hold a wind energy auction on Feb. 23, 2022, for more than 480,000 acres in the New York Bight. This will be the first offshore wind energy auction under the Biden-Harris Administration. The auction will allow offshore wind developers to bid on six lease areas – the most areas ever offered in a single auction – as described in BOEM’s Final Sale Notice. Leases offered in this sale could result in 5.6 to 7 gigawatts of offshore wind energy, enough to power nearly 2 million homes.

For more information on the NY/NJ Bight Wind Energy Areas.

NJDEP and NJBPU’s joint comments on the announcement of the New York New Jersey Bight Wind Energy Areas and the preparation of an Environmental Assessment associated with issuing leases in the Wind Energy Areas.