Vibrio parahaemolyticus (Vp) occurs naturally in marine environments. It is not related to pollution, which means that traditional controls for shellfish sanitation related to growing water classification are not effective to protect against the occurrence of Vp illnesses from shellfish consumption. Vp illness may self-resolve or lead to hospitalization.

Vibrio vulnificus (Vv) also occurs in marine environments and like Vp, illness may result from shellfish consumption. Vv illness, though not as common on Vp, tends to be more severe. The mortality rate from a Vv illness resulting from shellfish consumption is approximately 50 percent in healthy people. The rate is 70 percent in people with certain underlying conditions such as liver disease. If not treated within 72 hours of infection, septicemia can occur and death may be likely. 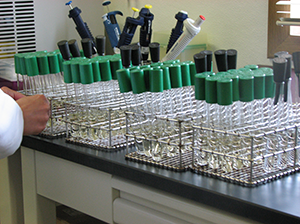 What does New Jersey do to address Vibrio in shellfish?

Procedures for dealing with Vibrio have been developed over the past several years through the Interstate Shellfish Sanitation Conference and are part of the National Shellfish Sanitation Program’s Guide for the Control of Molluscan Shellfish. The requirements for the authority set forth in the Guide are accomplished through a coordinated effort of the Department of Environmental Protection and the Department of Health. 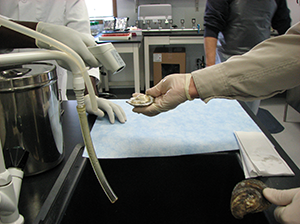 As part of the annual Vibrio sampling program, the New Jersey Department of Environmental Protection (NJDEP) collects oyster tissue, sediment, and water samples between the months of June and August. These samples are analyzed for total Vp, the virulent genes of Vp (trh and tdh), and Vv, using Polymerase Chain Reaction. Strain identification is also performed using Pulsed-Field Gel Electrophoresis (PFGE) to determine what virulent strains of Vp are in NJ waters.